New anti-corruption agency must not include law enforcement – David Lewis

New anti-corruption agency must not include law enforcement – David Lewis 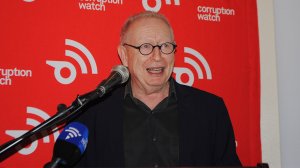 Former Corruption Watch executive director and member of the National Anti-Corruption Advisory Council David Lewis stressed on Thursday that while South Africa is in need of a new anti-corruption agency, it must not include law enforcement as he believes it will enormously restrict the public access to the agency.

One of the Zondo Commission reports recommendations is the establishment of a new anti-corruption agency.

Lewis was speaking during the State capture conference hosted by the Public Affairs Research Institute and the Council for the Advancement of the Constitution.

He noted that the confidentiality requirements in law enforcement, for agencies such as the Financial Intelligence Centre, the prosecutorial authority and the Hawks, were very strong and that the decision-making process could not be interfered with.

“If they are incorporated into the new Council, the Council will have to be effective - other anti-corruption activities will have to be subordinated to the law enforcement requirements for confidentiality. So public campaigns, media statements, all the staff that allow the public to develop a sense of confidence, a sense of engagement with anti-corruption activities, will be changed because law enforcement requirements for confidentiality would have to be respected,” he explained.

Added to that, he noted that to set up a new chapter nine institution would require at least two constitutional amendments with an elaborate legislative structure and a statutory basis.

He said one of the reasons why the anti-corruption strategy had failed was because it had no statutory basis.

“I do not know if a chapter nine institution is necessary,” he stated.

He said a new agency should be involved in advocacy, research and public campaigns.

He suggested that it would be an interesting and important task for the agency to look at why the State agency has been a “total failure”. Lewis believed one of the reasons it had been unsuccessful was because it included both law enforcement and non-law enforcement bodies.

He said while there were some good reasons for decentralisation, he believed it had become fragmented and impossible for National Treasury and other entities to exercise oversight.

He said one of the things that would need to be worked out in the new agency, if is was to be established, was a clear outline of what would be centralised and what would be decentralised. Also needing clarification was the investigation of irregularities, corruption and mismanagement, which he said was a centralised function.

Lewis made the point that a key element in the State capture project was the appointment process for boards and executives of State-owned entities, as well as the appointments of director generals of government departments such as mining, minerals and energy, which were of interest to Gupta targets.

He said the appointments were made in such a way as to facilitate State capture, and he thought it would be a good idea to place appointments in the hands of  a “blue ribbon panel” – a pool of people with unimpeachable integrity and some degree of human resource experience.

“Obviously from time to time if you are appointing somebody to do a contact to build a nuclear power station, you don’t appoint people who are experts in procuring stationary. So there has to be technical expertise on these committees as well,” he stressed.

He also suggested a high level government representative on each panel as government was entitled to require that appointees generally support the strategies and approach of the government of the day.

He suggested that it was a bad idea for one body to appoint an employee who was accountable to another person, explaining that if the CFO of a State enterprise reported to the CEO, it should be the State enterprise that made the appointment and not another body to whom senior people were responsible.

He explained that, as it stood, the Minister appointed CFOs and procurement officers, leaving the CEO with no power. He said these issues needed to be ironed out in the appointment process.

Also addressing the conference on Thursday was whistleblower Cynthia Stimpel who said South Africa had a dire need for adequate protections, as there was currently a lack of accountability for corporate agencies and no anonymity or financial and emotional support for whistleblowers.

Stimpel noted that steps must be taken to criminally sanction those harassing and endangering whistleblowers.

University of Cape Town's Professor Richard Calland spoke about the need for whistleblowers to combat corruption and uphold human rights, but he acknowledged that it could be extremely dangerous.

Corruption Watch’s Moepeng Valencia Talane highlighted the need for an additional service that provided counselling for whistleblowers, alongside legal and other support.

Former SABC journalist Thandeka Gqubule-Mbeki stressed the need for a dedicated whistleblower fund to be established within the new anti-corruption agency.

The world’s first offshore green hydrogen production demonstrator platform has been positioned offshore of France. “This is the first time that renewable hydrogen will be produced at sea,” French company Lhyfe stated in a release to Engineering News & Mining Weekly. (Also watch attached Creamer Media video. →