EFF to initiate motion of no confidence, national shutdown to remove Ramaphosa from office

EFF to initiate motion of no confidence, national shutdown to remove Ramaphosa from office 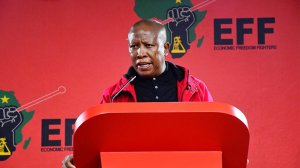 Economic Freedom Fighters (EFF) leader Julius Malema announced on Thursday that his party will approach all political parties in Parliament to initiate a motion of no confidence against President Cyril Ramaphosa if he does not step down.

The EFF will also engage in a national shutdown, calling for the President’s removal in the wake of the Phala Phala scandal.

Addressing the media at EFF headquarters, Malema said his party had been patient for too long.

He said he was confident that the African National Congress (ANC) would accept the motion of no confidence against Ramaphosa if he does not step down.

“So, we are confident that the ANC people will themselves accept that the motion of no confidence must be put on the President if he does not step down. The DA will have to defend the President. The DA will have to vote for violation of all laws of the land. So, if the DA decides to vote against the motion of no confidence, then the people of South Africa must choose what they want. But we are not going to fold our arms when we see open violation of the laws of the country because we think we won’t get sufficient support,” Malema said.

Malema said the EFF would approach the courts to compel Parliament to conduct a thorough and transparent investigation of any crimes committed by Ramaphosa with the aim of building a solid case for impeachment.

Malema said Ramaphosa was not above the law. He said corruption and the tendency to buy people and judges must come to an end.

Despite two new cases of monkeypox being reported, the health department says the risk of infection is still low for South Africans. On Friday, Health Minister Joe Phaahla announced that a fifth positive monkeypox case had been confirmed in Johannesburg.   →