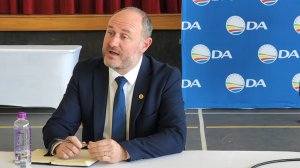 His election followed the earlier removal of African National Congress-led coalition government mayor Eugene Johnson through a motion of no confidence.

The chaotic meeting which was called at 11:00 on Wednesday, confirmed Odendaal at 03:00 on Thursday morning, with the new mayor beating Wandile Jikeka by a slender vote.

Jikeka, chief whip in the old coalition government under Johnson, was earlier voted out of the position.

The motion to remove the ANC coalition government was tabled by the African Christian Democratic Party (ACDP) and was seconded by the Freedom Front Plus (FF+).

The new whip, Harrington, told News24 that councillors only left the Feather Market Hall at 03:45.

"I slept for two hours but it was worth it. I believe our new coalition government will make a difference. We took a bit longer after the elections attending to some of the items on the agendas that were postponed, but basically, we approved all the budgetary items, therefore we also showed our commitment to ensure all various wards can start working [on] utilising their budgets to improve infrastructure and service delivery," he said.

It became clear on 29 July that the Johnson-led coalition government’s days in power were numbered when opposition parties in Nelson Mandela Bay signed another coalition agreement, to remove them.

He said the new coalition government’s main priority would be to restore what had been broken by the ousted government.

In a statement, the DA described the removal of the ANC-led coalition as the beginning of a process to get Nelson Mandela Bay working again.

Odendaal was first elected as a councillor in 2009 and served as the leader of the DA caucus between 2014 and 2016.

In a Facebook post congratulating Odendaal, DA MP and the party's Eastern Cape deputy chair Yusuf Cassim said: "Congratulations Retief Odendaal on your election as the Executive Mayor. Our city needs your energy and passion more than ever. Huge respect to our DA caucus and coalition partners who braved all manner of disgusting tactics until past 3 am this morning for the sake of our city."

Tourism Minister Lindiwe Sisulu says there haven't been cancellations by German tourists who had booked trips to South Africa following the murder of a German visitor on Monday. Sisulu briefed the media on Wednesday about her department's response to the incident, which claimed the life of a 67-year-old German tourist. He was shot dead in Numbi, Mpumalanga. The man and three other tourists, including his wife, were ambushed by three armed men near the Kruger National Park. "There hasn't been anybody who has pulled out of their trips. We wanted to have a press conference to show everyone that we are on top of the situation and that we are looking into our hotels to increase the safety of our tourists," Sisulu said. Sisulu tried hard to allay concerns about the safety of tourists and assured them that South Africa was safe for travellers. →