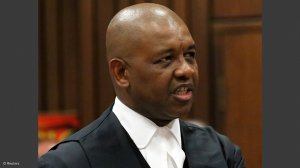 Public Protector Busisiwe Mkhwebane's advocate, Dali Mpofu, has threatened the chairperson of the Inquiry, African National Congress MP Qubudile Dyantyi, and several MPs have asked that he be investigated for it.

In terms of the Powers and Privileges Act it is illegal to threaten an MP in the performance of their functions, and it could carry a prison sentence of up to three years.

This morning, Mpofu asked for a postponement to work on the litigation following the Western Cape High Court ruling which overturned President Cyril Ramaphosa's suspension of Mkhwebane. The Democratic Alliance subsequently appealed to the Constitutional Court, and Mkhwebane applied to the High Court to uphold its ruling while this case was underway.

Ramaphosa, acting Public Protector Kholeka Gcaleka, the African Transformation Movement, the United Democratic Movement and the Pan Africanist Congress of Azania subsequently joined the latter matter, and according to Mpofu, there has been a "flurry" of court papers that he needed to respond to, and he couldn't prepare for the cross-examination of witness Nelisiwe Thejane.

As he has done throughout proceedings, Mpofu interrupted and spoke over Dyantyi, and Dyantyi eventually asked that he be muted.

The South African Health Products Regulatory Authority said it will continue to investigate severe reactions to Covid-19 vaccines, as reported by the public, following a second death after vaccination with the Johnson & Johnson Covid-19 vaccine.

The health authority confirmed a second fatal case of Guillain-Barré syndrome, a rare but potentially severe neurological adverse event linked to various vaccines and other medicines. It can also be triggered by some bacterial or viral infections, including SARS-CoV-2.

Mild to severe symptoms of GBS include muscle weakness, muscle pain, numbness and tingling. The Sahpra assured that in many cases, GBS resolves with no serious after-effects, however, it cautioned that in some cases GBS can cause serious or life-threatening problems.

The health authority will share the outcomes of investigations and causality assessments with the public as soon as they are completed and has urged the public to continue its uptake of Covid-19 vaccines.

And, Ruto sworn in as Kenya's fifth president

William Ruto was sworn in as Kenya's fifth president today, a week after the Supreme Court upheld an election that dashed the hopes of the nation's most prominent political families and handed power to a man who began his career as a roadside chicken seller.

Ruto, who served as deputy president for the past 10 years, takes over at a time of surging food and fuel prices, high unemployment and rising public debt.

The National Police Service had tweeted that the stadium was full by 5 am and they had asked citizens to stay home, but crowds continued to try to force their way inside.