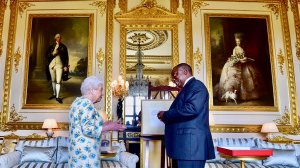 Making headlines: Mixed reactions in South Africa to Queen’s death; Ramaphosa concerned about attacks on councillors; And, Cele says foreign nationals are not a problem, but rather that South Africans are

President Cyril Ramaphosa expressed his “profound and sincere condolences” to King Charles III on the passing of Queen Elizabeth II of the United Kingdom of Great Britain and Northern Ireland.

Queen Elizabeth II, passed away yeasterday, at the age of 96, and was the longest-reigning monarch in the United Kingdom.

Ramaphosa said South Africa’s thoughts and prayers were with The Royal Family, the government and people of the United Kingdom as they mourned.

Democratic Alliance federal chairperson Dr Ivan Meyer said during Queen Elizabeth’s “extraordinary reign” over 70 years, she was known for her sense of duty and her devotion to a life of service.

Meanwhile, the Economic Freedom Fighters said the party did not mourn her death because it is a reminder of a “tragic period” in the country and Africa’s history.

Ramaphosa concerned about attacks on councillors

More than 300 councillors were killed in South Africa in the past few years, while 900 service delivery protests were held in the country between August 2020 and January 2021.

The statistics were revealed during the South African Local Government Association’s council of mayors conference in East London.

The two-day conference, opened by President Cyril Ramaphosa, brought together almost all 168 South African mayors to deliberate and collaborate on matters concerning service provision, local governance and strengthening municipalities to carry out their constitutional mandate.

Addressing the delegates, Eastern Cape Premier Oscar Mabuyane said most of the protests related to local government, the coalface of the governance system.

To stave off these protests, he said local government must be adequately funded for them to meet the minimum requirements of an ideal municipality.

And, Cele says foreign nationals are not a problem, but rather that South Africans are

Police Minister Bheki Cele says the fact that more than half a million South Africans were in the country's 243 prisons is a clear indication that immigrants are not worse than South Africans regarding crime.

He said figures indicated that only 18 000 of the 544 000 inmates in South African prisons were immigrants.

According to Cele, it is actually his countrymen and women who are involved in crime and who give him sleepless nights.

The minister, a former police commissioner, revealed that South African men raped 10 000 women over the three-month period between January and March this year.

He said 60% of the victims were raped in their own homes.