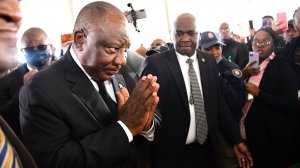 President Cyril Ramaphosa said today that while many young people tragically lost their lives recently at the Enyobeni tavern in East London, there are many more young people that must be saved from alcohol abuse.

Addressing mourners at the mass funeral for 19 of the 21 young people who died, he said it was a sad moment as parents were burying their children.

The children, aged 13 to 17, died under mysterious circumstances at Enyobeni tavern.

A team of doctors and pathologists, together with the South African Police Service, has ruled out a stampede as the reason for the deaths.

Ramaphosa sympathised with the parents and grandparents of the children who died, stating that in one night, 21 bright lives were snuffed out.

He stressed that what happened at the tavern was outside of the law and said it was time for all South Africans to draw the line and stop tavern operators who sell alcohol to underage children.

Former Eskom CEO Brian Molefe has been directed to pay back just under R10-million, plus interest, to the power utility's pension fund.

This follows a drawn-out legal process that dates back to 2018, when the same court set aside all Molefe's pension payouts.

But the former Eskom boss did not pay back the money in the intervening four years, arguing that he didn't know what exact amount he needed to pay.

The Gauteng High Court in Pretoria has now ruled that Molefe needs to pay the pension fund plus interest calculated from 31 October 2019 up to the date he pays.

In a statement, the fund said that this brings the matter of what Molefe needs to pay to a close.

The fund, meanwhile, will pay back Eskom the balance of the R30-million it had received from Eskom.

And, NEC proposes significant changes to Eskom operations in bid to address crisis

The African National Congress's national executive committee has proposed a raft of changes in the government's day-to-day running of the ailing State-owned enterprise.

The proposed changes form part of the ANC's frantic attempt to address the Eskom crisis, which has seen the power utility plunge the nation into Stage 6 blackouts.

According to ANC spokesperson Pule Mabe, the NEC urged the government and Eskom to look into measures such as increasing maintenance and improving the availability of existing supply as well as the acquisition of appropriately skilled employees and experienced mentors in an attempt to address the current crisis.