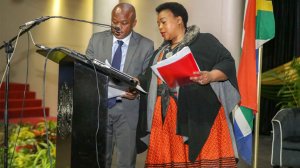 The ANC in the province announced his resignation as KZN premier following his defeat at the ANC KZN elective conference, where he had to relinquish the chairperson position.

The names of the three candidates have since been submitted and they will undergo interview process tomorrow.

The party said it was with great pain that it accepted Zikalala's resignation "as he was still doing a great job in the province since he took over".

Campbell said the issue of tariffs would be evaluated on a case-by-case basis.

The services that qualify for the 50% debt relief are rates, service charges, interest and other costs.

The scheme is available to Tembisa residents until March 31, 2023.

National Assembly Speaker Nosiviwe Mapisa-Nqakula has referred a request by the African Transformation Movement’s for Parliament to set up an inquiry into the Phala Phala saga to go to an independent panel.

In her response to the ATM who had filed their initial request for an inquiry to be set up to probe the allegations, and had to file another application, Mapisa-Nqakula said the subsequent request had been successful.

She said: "Now that the motion complied with the Rule, the other steps as per the rules will follow, including the appointment of the independent panel."

The panel will decide whether President Cyril Ramaphosa has a case to answer on the allegations of money laundering, related to a robbery at his Phala Phala farm.

Social compact should shift the needle on economic growth – Nxesi

Minister of Employment and Labour Thulas Nxesi said government and the social partners, including communities, must join hands and become more innovative in confronting the complex challenges the country is facing in taking South Africa to a higher growth path. Nxesi was speaking during the Presidential Social Sector Summit, in Boksburg, on Thursday, which he said came at an opportune time for the National Economic Development and Labour Council’s (Nedlac’s) community constituency. →